The celebration was kicked off by GCI Director Xuefei Cao’s speech. She warmly welcomed all the guests and sincerely wished everyone a great start for a prosperous new year. She fondly mentioned that relation is a key element of happiness and then reiterated the paramount importance of relation in Chinese culture. And thanks to the GCI’s cooperative relation with organizations in various fields, our co-organized events and projects have reached fruition.

Mr. Yiwei Wang from education section of the Chinese Embassy to the Netherlands then took the floor. He was genuinely happy to see that the celebration of Chinese New Year tends to be in a worldwide scale, indicating the role of China in the world is becoming more active and important. Since the establishment of GCI, it has been devoting itself to cement the friendship between China and the Netherlands from the language, cultural and business perspective. All these effort made by GCI has led to many achievements.

Mr. Yiwei Wang from education section of the Chinese Embassy to the Netherlands was giving a speech

After two speeches, the celebration was commemorated with an assortment of performances with unique Chinese characteristics. A Chinese cultural feast of Chinese folk dances, popular Chinese songs and famous Chinese poem was unveiled. The performers who brought a lot of joy were talented teachers and students from GCI, an employee from ICBC Amsterdam, as well as professional musicians.

“Bamboo Under Moonlight” performed by Wei Jiang and Jia Wang, teachers from GCI

“Folk Songs Are Just Like Spring River” and “The Moon Represents My Heart” performed by Jorg Kaaij-sopraan, Robert Bosscher

“The Love From Your Eye” sang by Micky Dai

“Farewell to Cambridge” recited by Yuhui Li and Jia Wang, teachers from GCI

“The Peacock” performed by Anqi Liang from ICBC Amsterdam branch

The signing ceremony of strategic partnership between GCI and ICBC Amsterdam was witnessed by all guests. It was hosted by GCI Director Mrs. Jingyi Liu who firstly presented a review on the history of cooperation between GCI and Industrial and Commercial Bank of China (ICBC) Amsterdam branch. She mentioned that GCI and ICBC Amsterdam have successfully held a range of events, such as Chinese contemporary advertisement exhibition, cross-cultural seminars, which laid a solid foundation for more promising future collaboration.

General Manager Mr. Feng Li from ICBC Amsterdam branch was also looking forward to more and closer cooperation with GCI. He held the belief that communication among employees with various cultural backgrounds was an essential element to a company in a cross-cultural environment. This value of ICBC Amsterdam, he remarked, was shared by GCI’s mission of promoting cross-cultural awareness and understanding.

Mr. Sibrand Poppema, President of University of Groningen and a board member of GCI, firstly congratulated on the newly-formed strategic partnership. He delivered his remarks that this partnership would usher in a new period of cooperation in the field of culture and business.

New Year reception went on with a reception, in which there are for sure social drinks but also exciting activities online and offline were hold. As commented by some guests, they were engaging, entertaining, innovative and thought-provoking. GCI online quiz game incorporated information about different aspects of China to allow participants find out how much and how well they understand China. In Chinese calligraphy activity, participants had the opportunity to get a nostalgic taste of Chinese culture.

Check out more of the celebration. 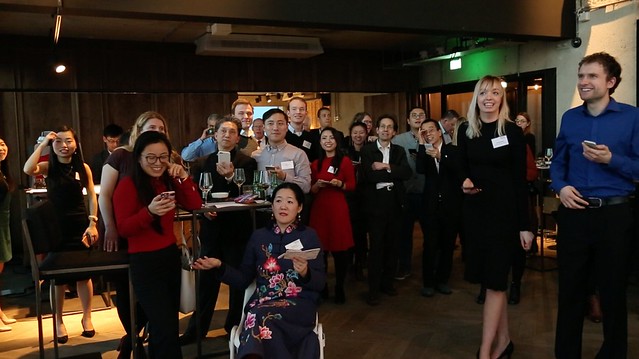